Bathroom Renovation is the Perfect Time to Reorganize

Recently I had the opportunity to help a client who was remodeling her bathroom. She had little time to pare down her stuff, so all of the contents of the bathroom were dumped in a spare bedroom. This actually worked in our favor as we could concentrate on one space and the contents did not get scattered all over the house.

The client wanted to reuse some containers that had worked for her in the linen closet as well as an over-the-door organizer. The dimensions of the linen closet did not change so we knew what the length and depth as well as how many shelves she had available for storage.

The first thing we did was to go through all of the linens. She decided on how many sheets sets she wanted for each bed. She chose 3 sets. Then we moved to the bath, hand and face towels. We unfolded and looked at each one, setting aside any that were looking old and ratty. Again, she decided on how many sets of towels based on the number of people in her family and regular guests. The towels that did not make the cut were donated to the local animal shelter. 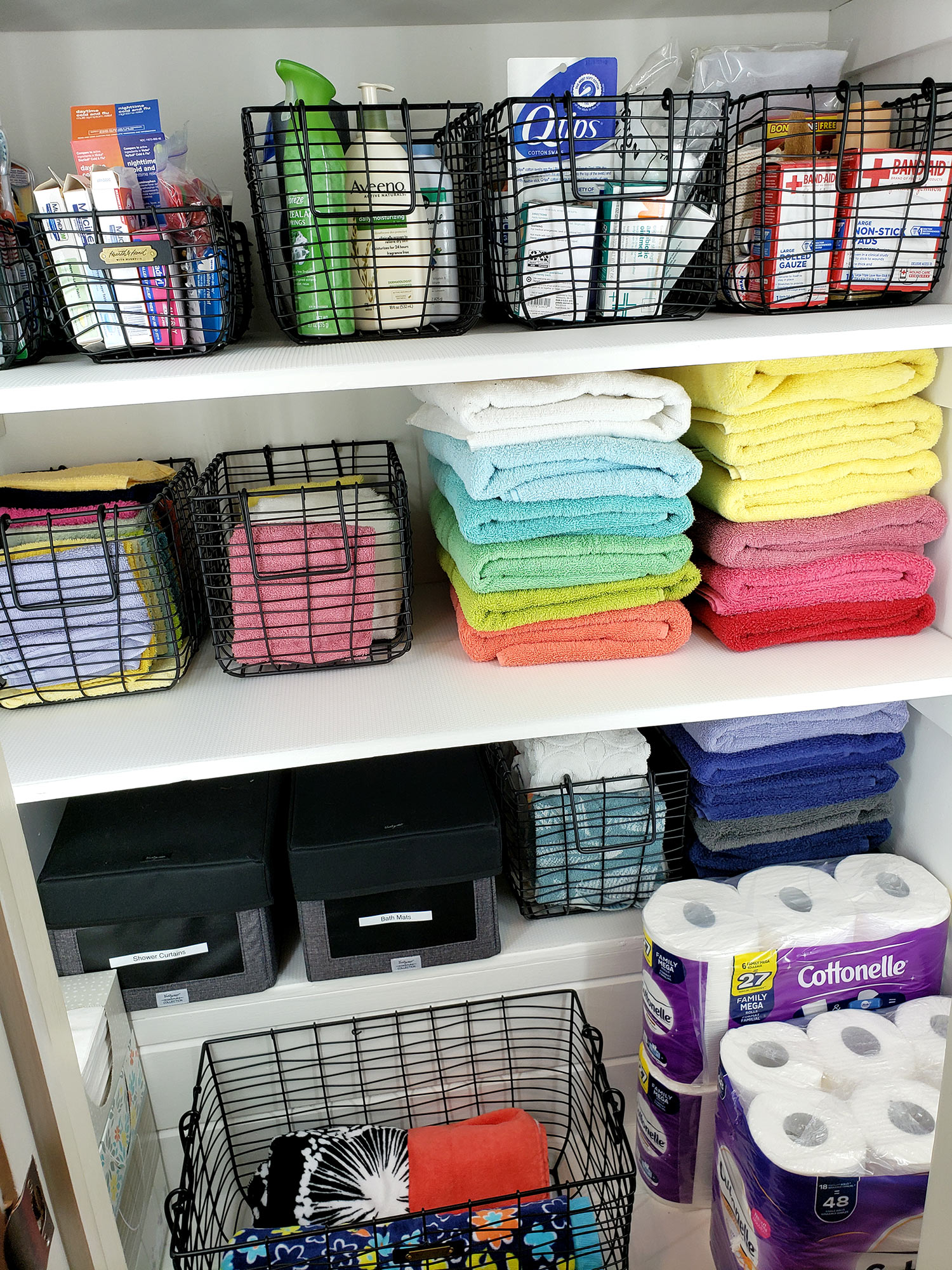 Then we tackled the toiletries. This category took more time as we sorted them all out by hair products, face, body, soaps, lotions etc. Because she could see all the like items together it made picking out her favorites to keep very easy. The rest of the items were grouped by donate and toss. Once we pared down the toiletries we decided where they would best be stored using the known containers. The over-the-door organizer was perfect for the smaller items and travel size products. The client decided that this area would be for things that were extras or travel only. 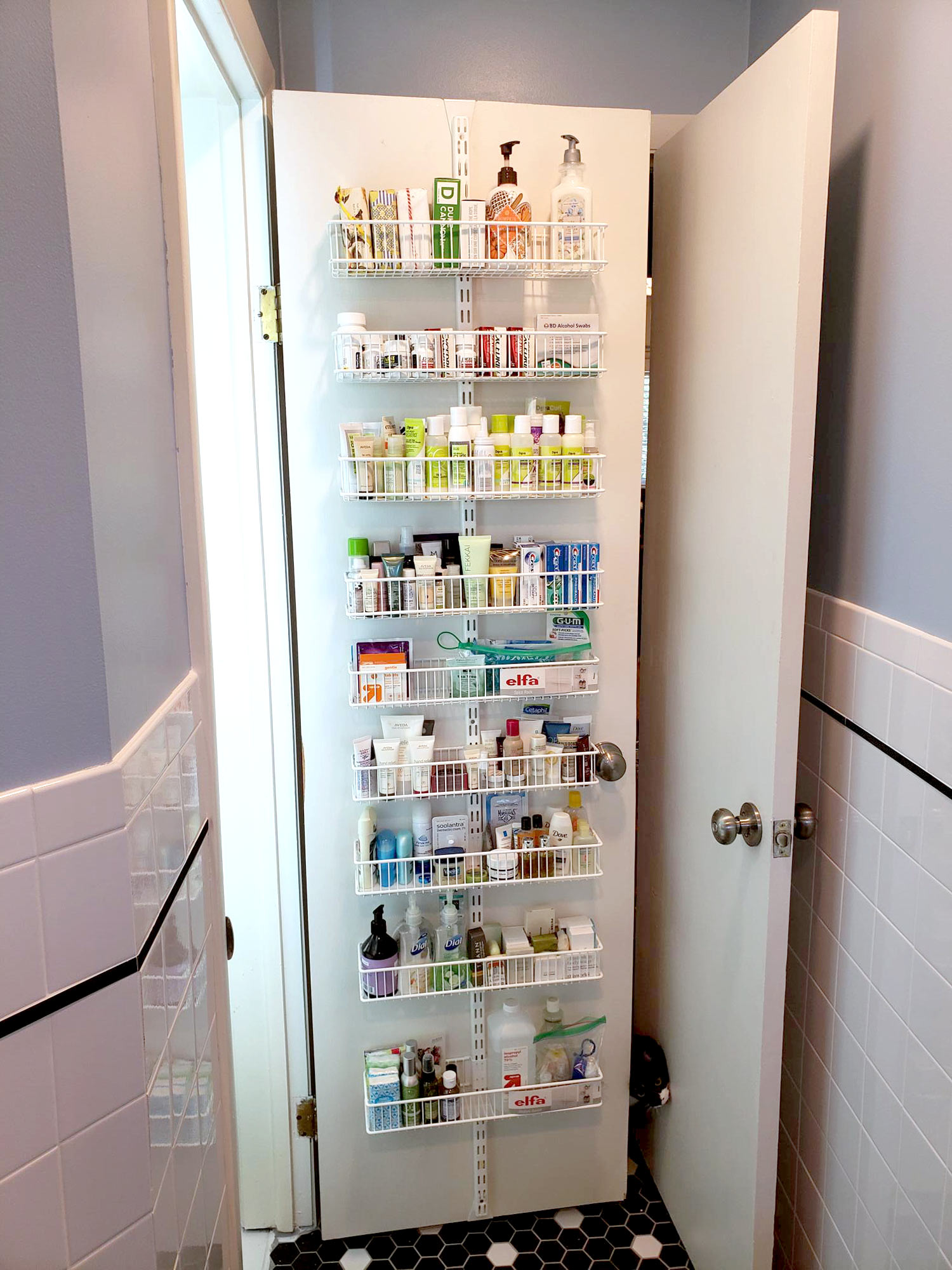 The medicine cabinet was perfect for everyday items and things that would be used by guests. We got the dimensions of the cabinet from the box and then laid out what was to go on each shelf. Then the client went shopping for containers that would hold the items. I suggested sticking to clear containers to best use the lights and mirrors of the inside to make it easy to see all the contents. 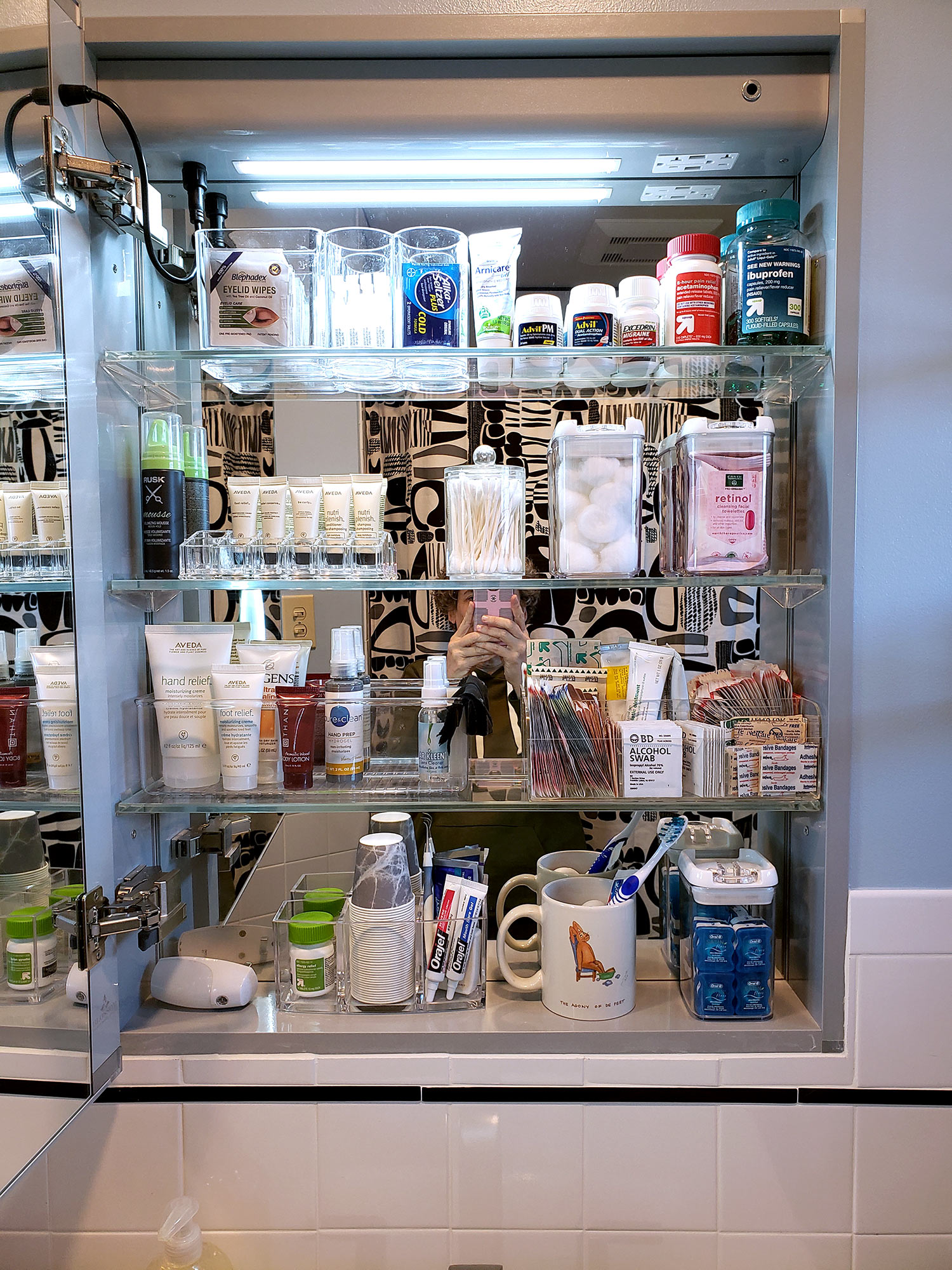 For the bigger items that would not work on the over-the-door organizer or the medicine cabinet we sorted them into categories like teeth, over-the-counter medicines, bath products, first aid items, etc. We knew how much of each items was going to be together. Then I went shopping for the containers. I picked this style for several reasons, it came in three sizes, it was open so you could see the contents and it used the available space the best with out looking crowded.

Finally, the rest of the bathroom, glass shelves, under the sink storage and the shower nook were organized for use and function. Keeping things streamlined and minimal were what was important to this client. 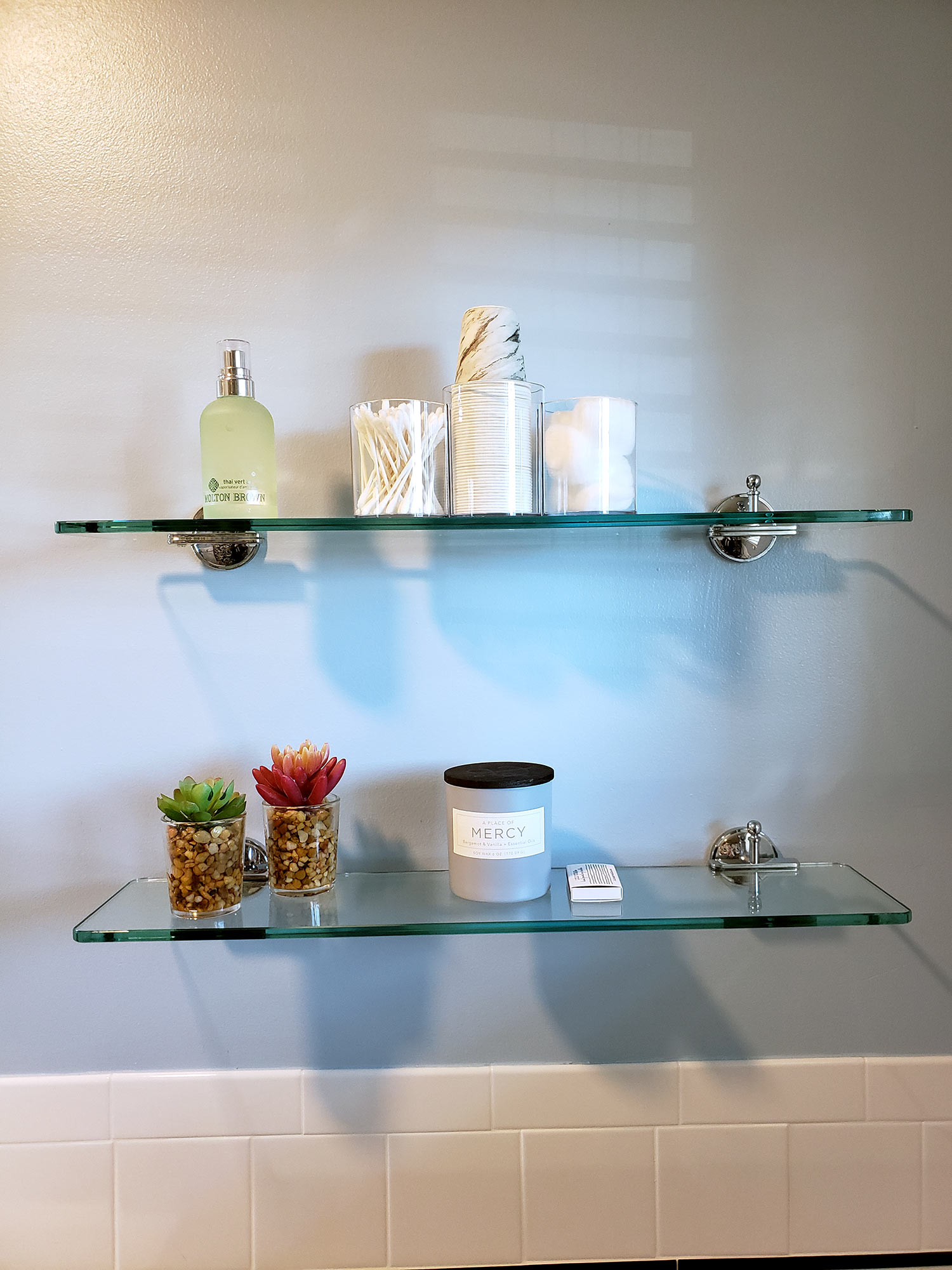 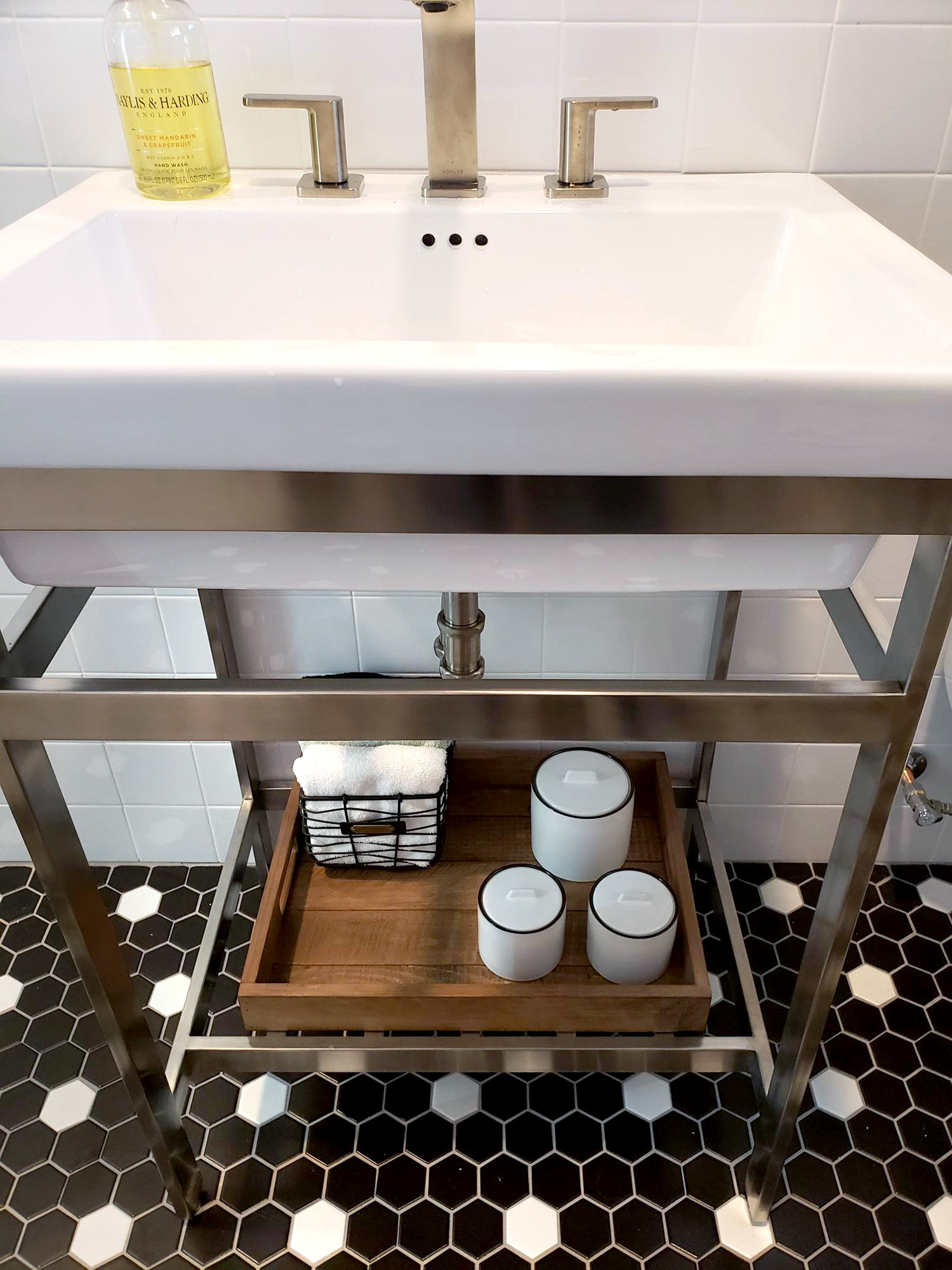 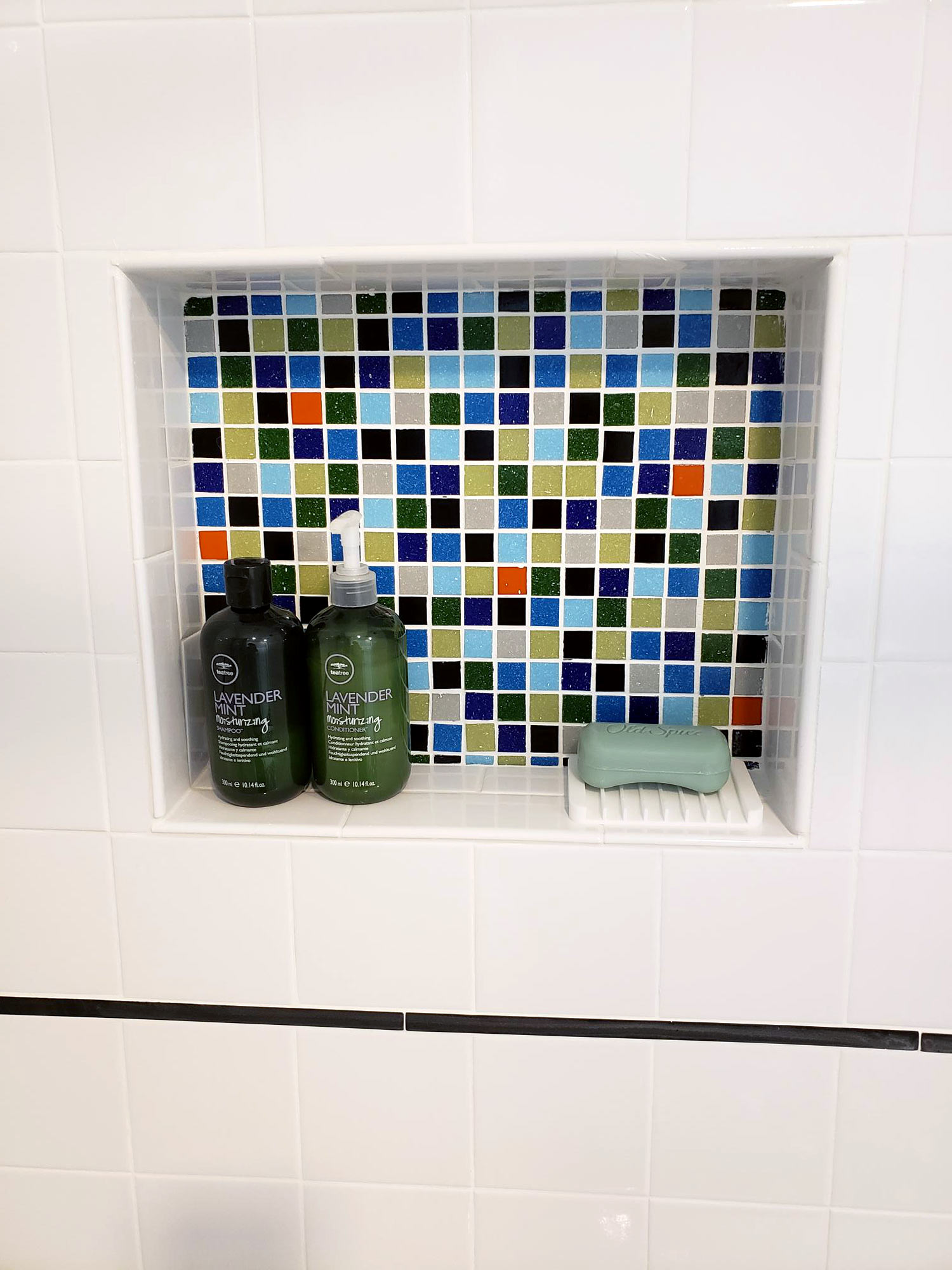 What we learned. If you are doing a renovation keep the contents from that room in one area. While the construction is underway it is a good time to sort, purge and organized what you really want to go back into this space. Knowing the dimensions of the storage space you will have is critical information. Then you can decide what are the best containers for the space. If you love what you already have use it first and then shop for any additional containers you need.